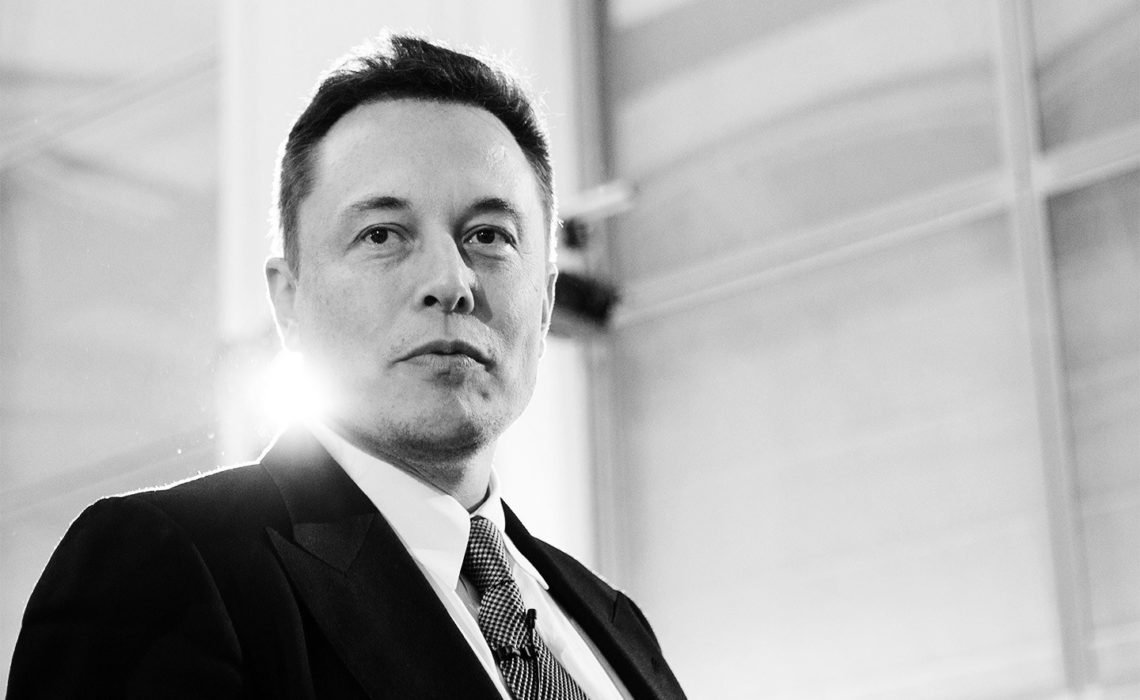 Elon Musk is a American business magnate, inventor and a self-made billionaire. He is the founder, CEO of SpaceX, a co-founder, CEO, and product architect of Tesla Inc. Musk is also a co-founder of  Neuralink, SolarCity, Zip2, and PayPal. During his childhood, he was an avid reader & daydreamed in a trance-like manner and coded his own video games.

Musk has stated that the goals of SolarCity, Tesla, and SpaceX revolve around his vision to change the world and humanity. He dropped out of his school at Stanford University to study physics to pursue his entrepreneurial aspirations in the areas of the internet and more.

He sold his first company, Zip2, an online-media services company, to Compaq for $307 million in 1999. Also, he founded another startup, X.com, that same year, which eventually became PayPal and was sold to eBay. Click to know more about him.

Here are a few book recommendations if you would like to know more about Elon Musk: “When something is important enough, you do it even if the odds are not in your favor.” – Elon Musk 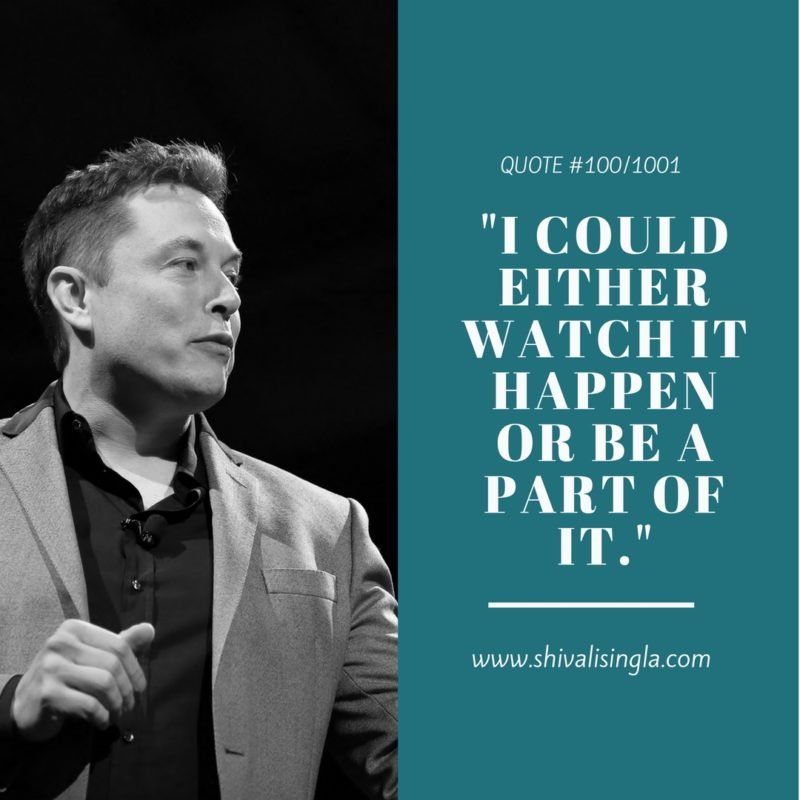 “I could either watch it happen or be part of it.” – Elon Musk 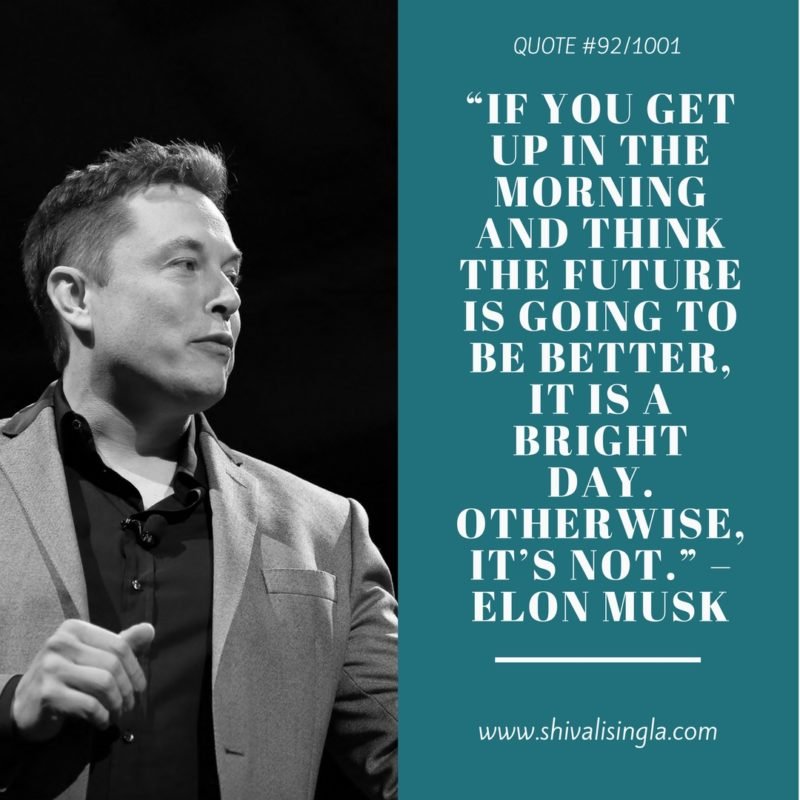 “If you get up in the morning and think the future is going to be better, it is a bright day. Otherwise, it’s not.” – Elon Musk 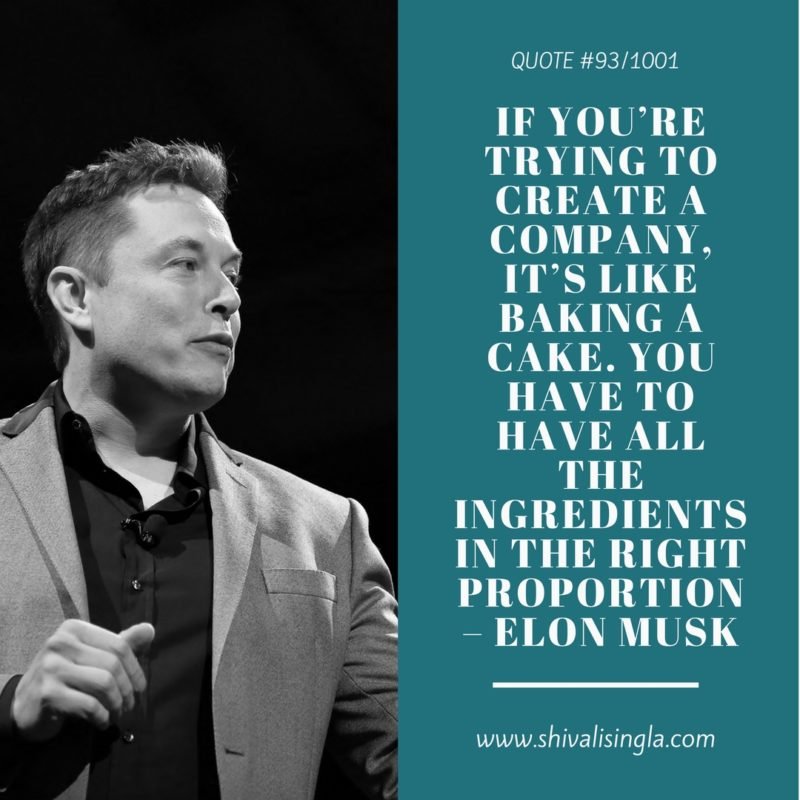 “If you’re trying to create a company, it’s like baking a cake. You have to have all the ingredients in the right proportion.” – Elon Musk 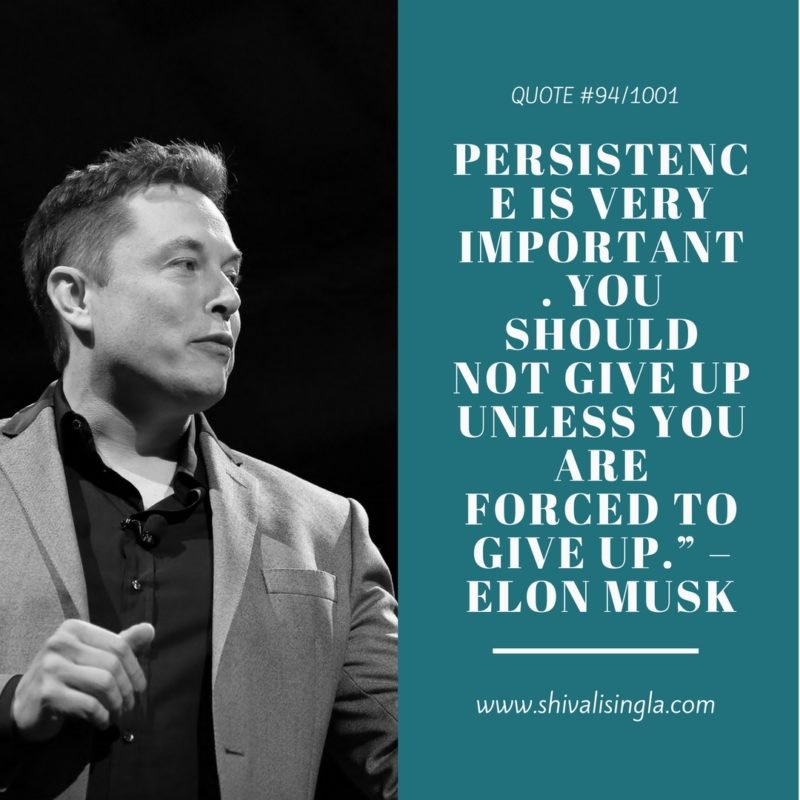 “Persistence is very important. You should not give up unless you are forced to give up.” – Elon Musk

“We’re going to make it happen. As God is my bloody witness, I’m hell-bent on making it work.” – Elon Musk 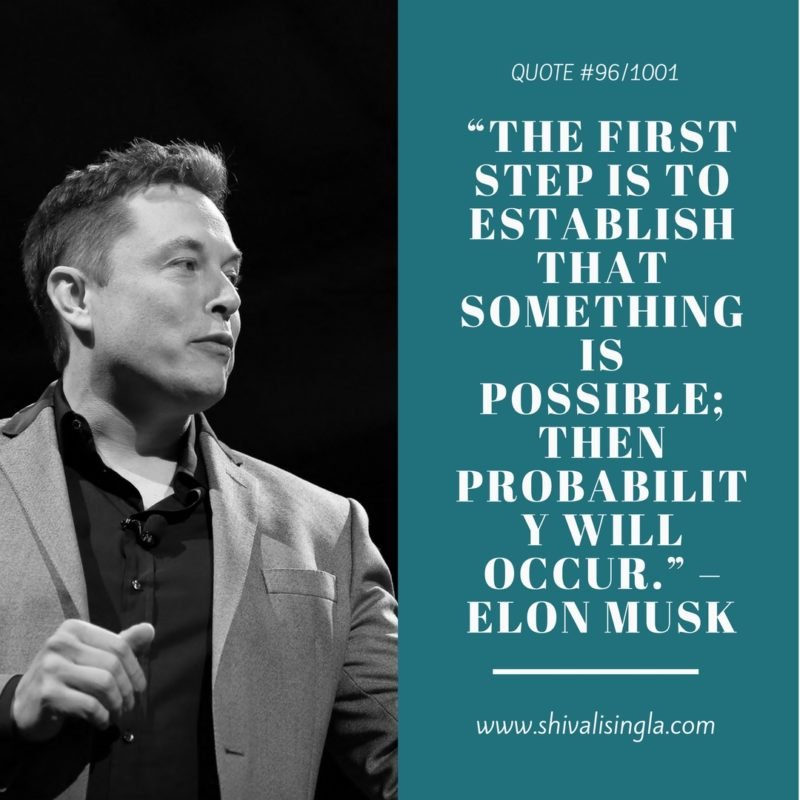 “The first step is to establish that something is possible; then probability will occur.” – Elon Musk 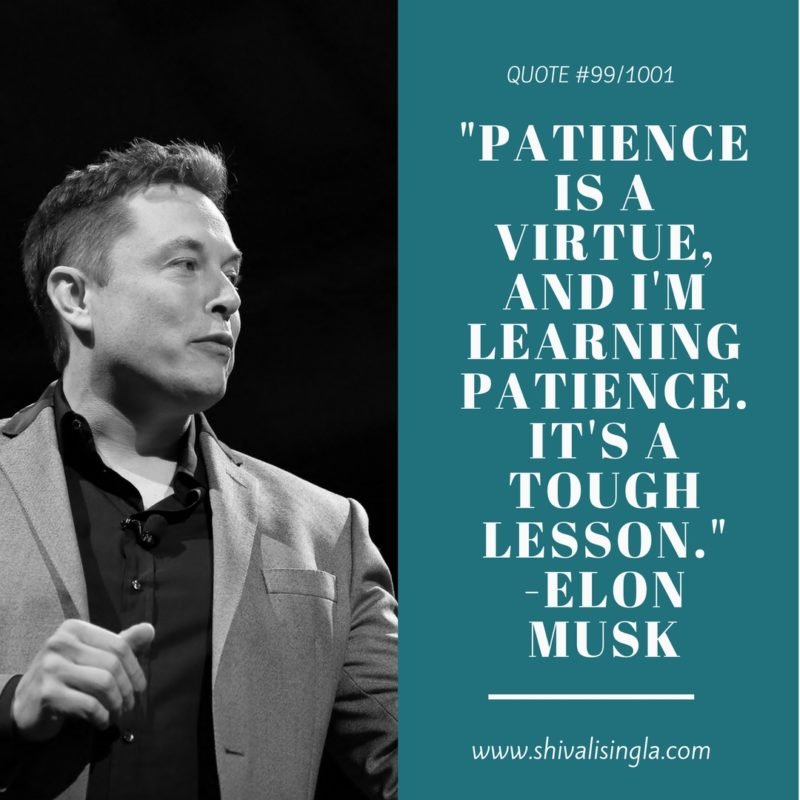 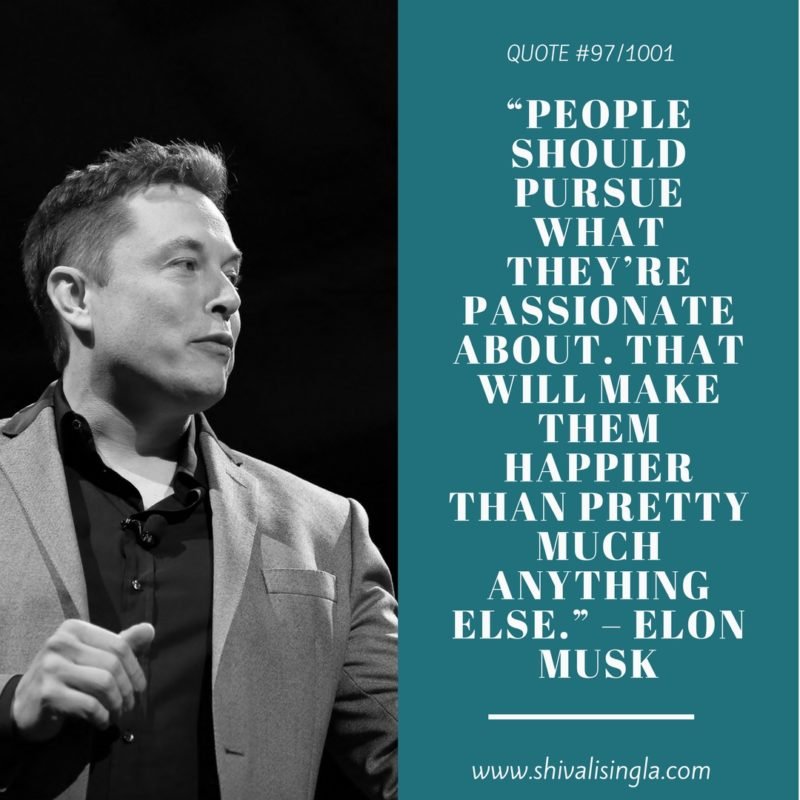 “People should pursue what they’re passionate about. That will make them happier than pretty much anything else.” – Elon Musk 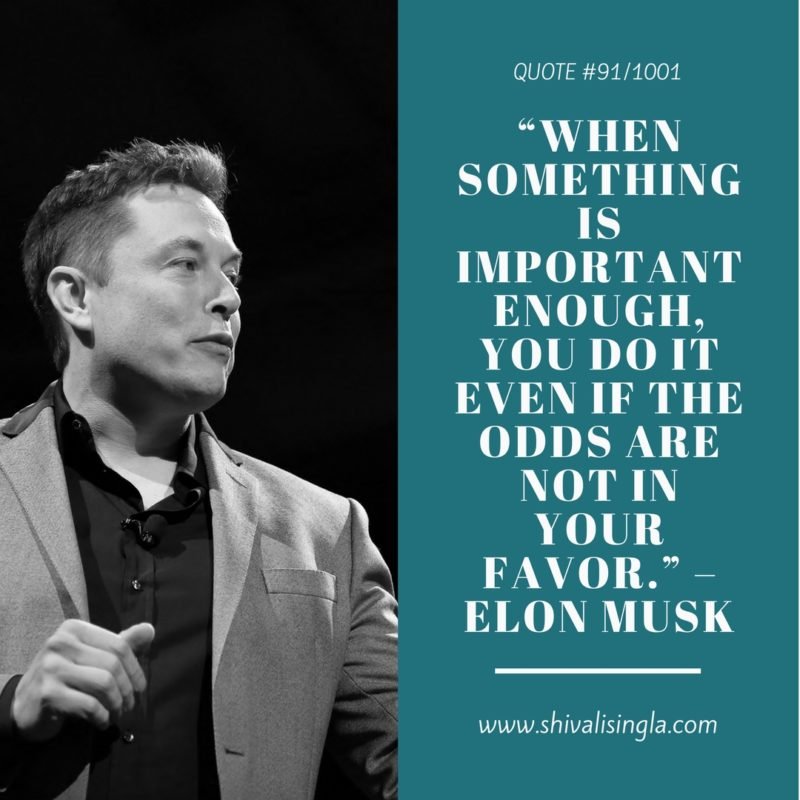 “When something is important enough, you do it even if the odds are not in your favor.” – Elon Musk

“I operate on the physics approach to analysis. You boil things down to the first principles or fundamental truths in a particular area and then you reason up from there.” – Elon Musk

“There’s a silly notion that failure’s not an option at NASA. Failure is an option here. If things are not failing, you are not innovating enough.” – Elon Musk

“If you go back a few hundred years, what we take for granted today would seem like magic-being able to talk to people over long distances, to transmit images, flying, accessing vast amounts of data like an oracle. These are all things that would have been considered magic a few hundred years ago.” – Elon Musk